I think I wanna marry you 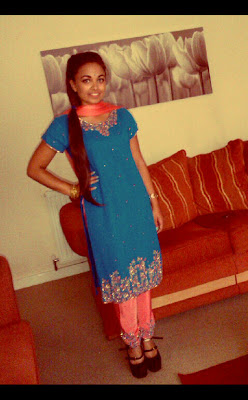 So. Yesterday the festivities for my cousin's wedding began. Or shall I say recommenced as they've pretty much been going on since last year!

Last night was her 'mehndi' night, where all the girls get henna done on their hands. Its really fun and I've never had it done professionally before! (My cousin's friend was doing the Mehndi as she's taken a course on it and she was absolutely super!)

Its a really gorgeous and girly night... However, once upon a time it was attended only by the girls. Now there are plenty of males around as well. I don't know whether this makes it more fun or less... My baby cousins were forced by some desperate males to talk to me about whether I'd like a drink from him... That's lame on another level. This kind of 'courtship' is so common at Indian get-togethers. It seems someone sees someone getting married and fret about finding a wife for themself and simply look around them! Stupidity! He wasn't bad looking but I laugh at any girl who falls for that. Bless him...

My cousins arranged a 'play' of her 'funny moments' which was hilarious and my cousin and I played a 'mr and mrs'esque game with the couple giving the groom the worst drink the bar tender could concoct if he answered a question differently from the bride... (Marriage is UNITY!!!)

It consisted of black sambuca, beer, vodka, coke, and much much more. I tried a bit and couldn't get the taste off my lips for hours. Disgusting!!!!!

I've spent months in anticipation of this wedding that I never really 'thought' about it but its just amazing that these two people are so in love with each other they're forgetting the world and spending the rest of their lives together. I nearly welled up at points but that may have been because of the gloriousness of the open bar as well! I shall be getting more mehndi done on Friday so look out for pictures of the finished article!!
Posted by Unknown at 13:12